Life is short. Death is forever.

Do you ever wonder what would happen if you died and went to Hell? Most people believe that when they die, they are going to a “better place”– Heaven. Strumming harps, sitting on clouds, playing Scrabble. Whatever.  But what if there were all these unwritten rules that we weren’t aware of–that, when broken–sent us automatically to Hell? Did you know that in a person’s lifetime they are only allowed to say fuck 700 times before being damned? (Does that one count??) Or that statistically there are WAY more blondes in Hell than brunettes? (FUCK! …Sorry…!) Or that Hell’s currency is candy? (Milky Ways and Almond Joys, none of that candy corn crap).

Well, I didn’t either. But according to Chuck Palahniuk, I’m Damned. 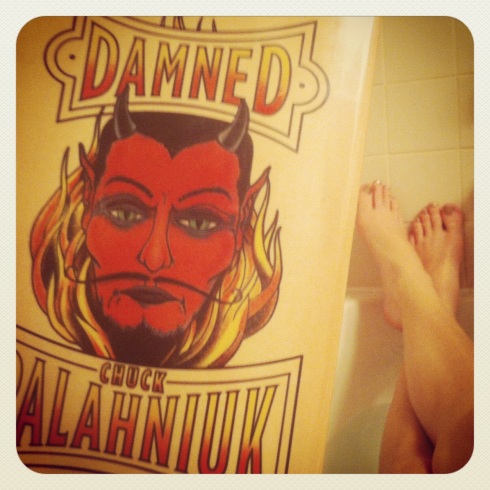 Palahniuk’s latest tale follows Madison Spencer, our13 year old protagonist who dies after a fatal marijuana overdose and is sent straight to Hell. (Wow, we’re really screwed, huh?) There she meets a Breakfast Club-style cast of punk, nerd, jock, and resident hottie–all whom have been sent to Hell for seemingly innocuous reasons. But, then again who’s word can you trust in Hell? Once you’re in there, all bets are off, because what punishment is worse than being damned? Other than the pit of swarming insects, the threat of being eaten “alive” by a perpetually hungry demon, sand dunes made of cast off toenail clippings, the bog of partial birth abortions, and the sea of spent semen. For real.

I guess you can say Palaniuk hasn’t lost his touch for disturbing imagery. Although, he did make Hell pretty awful and pretty smelly, you have to admit the guest list is pretty stellar. Marilyn Monroe, Jimi Hendrix, pretty much every politician…ever, and all redheads. (Told you they didn’t have souls). Hahaha. Too many cool people to name, really. Other than that whole being-torn-limb-from-limb-only-to-regenerate-and-have-it-happen-again thing… Sounds like a pretty fun party.

I enjoyed this book, although is was not my favorite by Palahniuk. Yes, it had the nasty imagery, and yes there were some pretty fucked up (oops) things going on around Maddie, but it lacked the grit and broken glass that was Fight Club. And the sweat and bodily fluids that was Snuff, for that matter. I did like the twist at the ending, but I felt that the teenagers had so much free reign that Hell kind of lost its luster. I also wasn’t sure if Maddie’s ascension to power in the end was totally believable, because I felt as though there was a split-second change in her personality rather than steady personal growth. If I didn’t know any better, I’d almost think this was Palahniuk’s attempt at YA Fiction, because in comparison to his other works, Damned is pretty tame.

No nightmares to be found here, kiddies.

If you need me, I’ll be at the salon getting my hair changed back to brunette…

4 Hitler mustaches out of 5