Dead Ever After by Charlaine Harris

It’s been a long time coming for the supposedly “last” book in the Sookie Stackhouse series. With a huge fan base and a wildly popular HBO TV series (Alexander Skarsgard, anyone? Nomnomnomnom), Charlaine Harris is living the life that most poor starving authors can only dream of. Unfortunately, she may have been too deeply asleep when she wrote Dead Ever After… Someone needs to pinch the crap out of her!

DEA seems to exist solely to tie up any plot threads that are still left–gasping for air–no matter how weak they may be. Eric, the fairies, Sam, the Weres, Amelia… You name it. Unfortunately, Harris seems to bring up a few new characters and then forget about them–leaving their stories unanswered. But not in a cliff-hanger/spinoff kinda way. More like a “Oh, I totally forgot about that, but oh well my manuscript is due tomorrow! *Send*” kinda way.

Also, as much as I’ve enjoyed the majority of the SS series… Can we please stop detailing Sookie’s mundane day-to-day life?? She literally wasted a whole sentence–awholesecondofmylife!–bemoaning how hard it is to stuff a Digiornio box in the trash. Seriously?? Way to yank me out of the moment. I know plenty about taking the garbage out, not so much about the TrueBlood vamps. That’s what I’m paying you to write about, not pizza boxes.

AND–I DON’T WANT TO SPOIL ANYTHING FOR YOU–BUT… The way she handled Sookie’s love life in this book was very strange. And I would NOT have made the same choice had I been in her shoes. Ew. I mean, woof.

All in all, since I have OCD about this sort of thing–I’m glad I read DEA. However, if this had been my first Charlaine Harris experience… I would’ve run screaming for the hills. I can appreciate a light pool-side read every now and again, but if Sookie’s story gets any lighter it just might float away.

Sookie, Sookie, Sookie… What kind of trouble have you gotten yourself into now? Well, turns out it because of all those damn vampires you associate with. Surprise, surprise… In Deadlocked by our beloved Charlaine Harris, Sookie once again finds herself in the center of a legal/paranormal shit storm. This time her (sexy) Area 5 Sheriff boyfriend Eric has been accused of killing a girl who ended up dead on his front lawn during a party. No big deal, people die, right? Surely it wasn’t Eric! But when Sookie walks in on Eric erotically feeding from the girl shortly before her death… Let’s just say even she has her suspicions about his innocence.

Now not only is Sookie questioning her lover’s involvement in the girl’s death, but now she has her fae cousin Claude’s fishy behavior to contend with. Oh yeah, and that hateful bitch Jannalyn (that Sam is STILL dating) definitely seems like she’s up to no good. *sigh*

If I were Sookie I’d be booking the first flight out of Louisiana I could get–grandma’s house or not. Forget that mess!

As always, Harris has churned out another page-turning novel. But, I will admit that the quality of her work has gone down with her last few projects. They girl-next-door aspect of Sookie’s personality that we all know and love is getting a little tired, especially when Harris wastes page space with detailed descriptions of mundane activities like folding clothes and cooking. We get that Sookie is just like the rest of us, but I have never in my life started a story with “One time, when I was folding laundry….” Get to the goods, woman!

I sensed a definite air of closure during this book, and Harris went through the motions of tying up most of the supporting characters’ loose ends. The only real question mark left is what’s going on between Eric and Sookie and at this point I don’t really know what I’m hoping for…

Definitely read Deadlocked if you’re a die-hard fan but you can skip it because (and I know it’s a bookworm sacrilege to say this but… the show’s better!)

Sookie Stackhouse is at it again in Charlaine Harris’ eleventh installment in the TrueBlood series, Dead Reckoning. In her characteristic style, Harris once more intertwines life in the dirty south with life as the dirty dead. The brand new book picks up where Dead and Gone left off. Sookie is still dealing with the knowledge of her fae ancestry, and her new found faery relatives Claude and Dermot. She’s still struggling to figure out her relationship with her undead boyfriend–the ancient, sexy, (and a bit scary) Eric Northman and she has as many enemies now as ever before.

After Merlotte’s is bombed, moltov cocktail-style, Sookie’s rare moment of peace is over. Not only does she have to figure out “who dunnit” but now Eric and Pam are being threatened by Victor, the regent of Louisiana. Victor has denied Pam’s wish to save her lesbian lover from an untimely leukemia-fueled death by converting her to vampirism. Now the legality of making a “child” without their ruler’s persmission has come into question. And of course Ms. Stackhouse somehow ends up in the middle of it all. A vampire battle royale is sure to ensue. 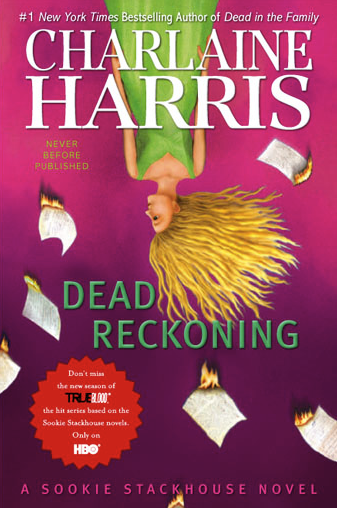 Not to mention the fact that the crazy she-bitch Sandra Pelt is after her again.

Or that Sookie is finding out that her deceased grandmother may have kept some MAJOR secrets from the family all these years.

And Eric seems to have been hiding something from her lately…

Plus there’s that damn baby shower she promised she’d throw for Tara.

If she can survive that long, that is.

It was refreshing for me to read this book after what heavy fodder The Memory Keeper’s Daughter turned out to be. This was light-hearted, fun, and entertaining. It certainly isn’t a brain teaser by any means, but that’s ok. I enjoyed revisiting the old characters– it was like catching up with a long distance friend after not talking for a while. While some readers may be up in arms over some of the more obvious plot holes (like Eric and Sookie’s faery grandfather Niall, supposedly being in touch much longer than previously mentioned…) I took it all in stride. This book is a beach read, not the next great American novel, and one should enjoy it for what it is.

However, I will say that anyone interested in the Trueblood Series could easily stop reading after the 5th or 6th book and be just as happy. I feel like the more recent in the series have gotten a bit tedious with Sookie’s day to day life (running errands and working at Merlotte’s, etc…) Harris also has the irritating tendency of mentioning well known stores/brand names like Walmart and Hardee’s in her novels, which I find very distracting. Any amateur writing workshop will tell you to avoid this, as it dates your work.

All in all, I would encourage die-hard Trueblood fans to read Dead Reckoning, but it isn’t a must. It entertained me for a couple of days, but I wasn’t sad when it was over. As much as it kills me to say it–I actually find the show more engrossing than the last few novels, even if it does dramatically deviate from the plot line.