The Almost Moon by Alice Sebold

So kiddies, I finally knocked out the last of Alice Sebold’s books, The Almost Moon. First she brought us The Lovely Bones, then Lucky, and now this. I’m kind of sensing a theme here…

The Lovely Bones was about a little girl’s abduction/rape and then subsequent death–told from the perspective of her watching her family from heaven. Lucky was Sebold’s personal memoir about her own rape experience. And now, The Almost Moon was about a woman finally killed her deranged, elderly mother after hating (loving) her for years. Phew… Pretty intense. 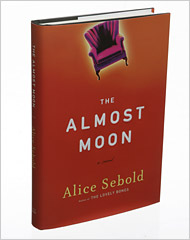 I like Sebold for her daring. She’s willing to go where not a lot of authors are. She talks about the rape of a child, her own rape, and the killing of an intimate with a clear and honest voice. I like that a female author is not afraid of touching on such taboo topics. I enjoy being shocked.

That being said, The Almost Moon left me wanting. Big time. I LOVED The Lovely Bones when I read it several years ago because when Sebold is in her full swing there’s no stopping her. She has a way with language that can be quite poetic at times, and she notices the little things about the world that no one else would think to mention. However, in this particular novel, the plot moved rather slowly because all of the good action happened almost immediately. This is great to get the reader hooked, but you have to keep them coming back for more. It took me about a week to read this, which is a long time for me. The main character Helen was not very warm, and even though we lived inside her head within the pages of this book, I never felt as if I really got to know her–or understand her motives.

If you are willing to suffocate your insane mother, your own marbles need to be accounted for. I get it. But at the same time, rather than being interested in Helen’s (extremely freaking) dysfunctional family– I was repulsed by it. And every step she took farther down the rabbit hole of killing her mother (and disposing of the body) I just kept screaming NO NO NO at her in my head. Maybe it’s just because I’m a Criminology major, and I’ve grown up on a steady diet of Cold Case Files and 48 Hours and I’m biased about the whole thing–but damn, this woman was dumb! I know it wasn’t premeditated, but she pretty much incriminated herself in every way possible.

The book itself was hard to read because 95% of it took place alone in Helen’s head, without much dialogue to break things up a bit. There were tons of flashbacks setting up her reason for murder and the whole story jerked back and forth each time she switched gears. I wasn’t terribly impressed.

All in all, my recommendation is that you should reach past The Almost Moon to grab The Lovely Bones, any day of the week.

Uninvited by Amanda Marrone tells the tale of Jordan, a high school girl whose two month relationship with Michael–the high school all-star–was the highlight of her life. Unfortunately her brief moment in the sun was ruined when she broke up with Michael, and completely went sour when he turned up dead shortly thereafter. Michael’s parents declared that his death was a suicide, even though his throat had been slashed under mysterious circumstances. Jordan knows better. Michael loved life (and girls) too much to kill himself. 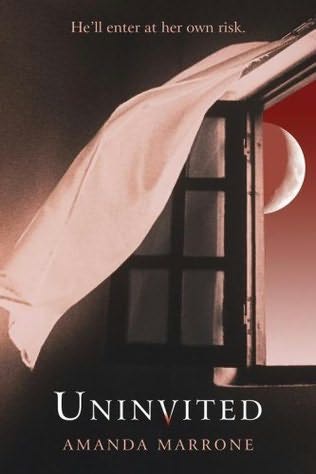 Jordan’s life since Michael’s death has been a sad series of random party hook-ups, getting trashed with her no-good “frenemies,” and trying to avoid attention in the hallways at all cost.

That is, until Michael appears one night at her window.

Demanding to be let in.

Wanting to spend forever with her.

If only she’ll open the window…

Well… Uninvited was on my Amazon wishlist (an awesome way to keep track of your reading list, I might add…) for about a trillion years before I got around to reading it.  I stumbled upon it at my store one day and knew it was time. And I have to say, I was a bit disappointed.

I didn’t  mind Jordan as a character, but I didn’t like or understand the fact that she was terrified of walking down the hallway by herself, but could go to random parties and have sex with strangers without a problem. The two don’t seem to mesh very well. I get the fact that she was abusing drugs and alcohol, and that affects your judgement, but at the same time how could she be so painfully shy during the day and so promiscuous at night? If nothing else you’d think all the sex would make her more popular! Rachel was an interesting best friend, and if she had been the main character the book would’ve had a completely different spin.

That being said, I did like how Marrone was really up front with all these teen issues. Most authors skirt around talking bluntly about teens having sex and doing drugs because they want to avoid “gate keepers” (parents and teachers who read books before they allow their kids access) getting in the way. Marrone was fearless in that regard, and I do appreciate that. I also liked that she made Jordan really conflicted about Michael and her feelings for him. She missed being with him, but deep down she knew that something was wrong with him.

However, even though Jordan was characterized by her poor decision-making, I could never see why she was in love with Michael. From what I gather, he was very handsome, but he was such a jerk! Any guy who is going to force physical activity on a girl right away is no bueno. I guess it all boils down to teenage girls and their poor self-esteem. It’s a universal theme in young adult fiction, sadly enough.

The conclusion was a little anti-climactic, and I never felt connected enough to the secondary characters to really care what happened to them. Oh well, it wasn’t a long or difficult read…