Survive! Essential Skills and Tactics to Get You Out of Anywhere–Alive by Les Stroud

I was a little trepidatious to start Survive! simply because I’d read 98.6: The Art of Keeping Your Ass Alive by Cody Lundin not too long ago and I hated it.  It was longer than necessary and super boring, and I all really learned from it was to bring a bunch of survival objects with me, cover them all in neon tape, and DON’T GO OFF ALONE IN NATURE, STUPID. A long pamphlet would’ve sufficed.

So it was a pleasant surprise when Les Stroud’s book was written in a much smoother format and he actually told me things that would help me survive.

Uh… Isn’t that the point? 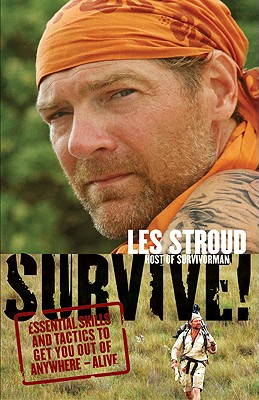 I actually learned things while reading Survive! and on a recent trip to the camping section I recognized several things he’d mentioned in his book–and I knew how they could be used. (This is no mean feat for me because I HATE camping, tools, and fixing anything).

I liked the fact that he included real life anecdotes about people that had used his techniques to survive–like the couple whom, when stranded in their truck in a blizzard, ripped up the seat cushions and fashioned snow shoes out of them. They then used the shoes to walk many miles to safety (and didn’t lose any toes to frostbite!)

He also mentioned some things that I would’ve never thought of until my “survival moment” happened. Like don’t get all emotional about destroying the environment if it will help you live. I could totally see myself not wanting to rip down saplings to build a shelter or feeling horrendously guilty about burning rubber to generate a signal fire. He makes the point that you can use your bleeding heart for nature’s benefit at a later date, right now you are trying to live to see said later date.

Stroud reiterated several important pieces of advice throughout the book, including staying hydrated and being extremely careful about eating any unknown plant matter. He said that many people will die of thirst rather than drink from an untreated water source, but really, when it comes down to it, shouldn’t you be willing to take that chance if it’d save your life? He stated that someone’s irrational fear of stomach upset/diarrhea/parasites outweighs the much more realistic fear of dehydration. He argues that if you make it out of your situation alive, you’ll be able to get treated for parasites later. But you’ll never get treated for anything if you weaken and die because you were unwilling to drink from the puddle beside you.

He also said that many people fear starving to death above anything else. They are convinced that by not getting three regular meals a day they are on their way out. This leads them to make stupid decisions about eating native flora and that in and of itself has caused a number of deaths. You can survive for a LONG time without eating, but not very long without drinking. This means don’t go eating that pretty mushroom or strangely-shaped leaf because your stomach is growling. Be smart about it.

This is a must read for everyone, because you never know when you may need some survival skills!