Are You Ready For a Little Twain and Steinbeck?

Two dear friends of mine recently gave me several new books to adopt. Among them were The Moon is Down by John Steinbeck and A Connecticut Yankee in King Arthur’s Court by Mark Twain. Having never read anything by either of these classic authors (I know!) I was ready for something spellbinding. 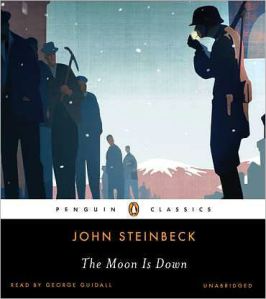 Unfortunately, TMID left me disappointed. I was hoping for something completely different than was Steinbeck’s intention, although it is a great piece of war propaganda and it undoubtedly caused a huge uproar during WWII. It was obviously a thinly veiled re-imagination of the Nazis. What made it so scandalous, however, is that rather than being portrayed as death-dealing automatons, the Nazis were just… young men. Young men that craved love and wanted to go home. Still, from a literary perspective, I found it pretty dry until the end. 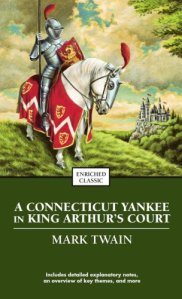 ACYIKAC was a bit more fast-paced. It told of an average Joe from the late 1800’s being mysteriously transported back into Camelot. Naturally, with his “modern” knowledge, he was quickly deemed a wizard and become one of the most powerful men in England.

The idea of advertisements on knight’s shields and all the wonders of the 1800’s was certainly an entertaining idea. But… oftentimes Twain’s passages were long and confusing and I had to re-read them to understand what was going on. I also didn’t like that how the protagonist got to Camelot was never explained. For some reason, missing this vital detail, I couldn’t sink into the world as seamlessly. But, of the two, I definitely enjoyed this one better.

3 knights errant and lonely Nazis of 5