Rosie Little’s Cautionary Tales is one part warning and one part fairy tale. It’s broken up into about a dozen short stories, half of which follow the course of Rosie Little’s life experiences, the other half following the mishaps of several random women. Rosie’s penchant for red and her reference to an abusive boyfriend as “the Wolf” make her a modern day Little Red Riding Hood. Except RL has a fairy godmother that keeps popping up in the most unexpected of places.

The book highlights some of the more important cornerstones and moments of a girl’s life, including: virginity, truth, travel, beauty, art, love, commitment, marriage, work, longing, loss, and destiny.

At some points Wood seemed a bit muddled on whether or not her book was going to be pure fiction or fairy tale. Much of the book seems perfectly “normal” but several of the stories (and parts of Rosie’s life) have supernatural elements thrown in. I enjoyed it quite a bit, especially the magical parts, but I think it could’ve been a tad more stitched together. 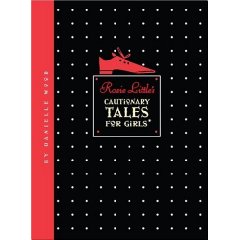 Rosie also scattered tidbits of wisdom throughout. This one was my favorite:

A Word from Rosie Little on Facial Lines

No doubt your mother, or some other responsible adult in your life, warned you about pulling faces when a change in wind direction was on the cards. Of course, the idea that you could end up with the tip of your tongue lodged permanently in a nostril just because the breeze swung to the east sounds as ridiculous as green vegetables putting hairs on your chest, or the marrow in your bones melting because you sat too close to a fire. But on reflection (my own reflection, as it happens, in my very own bathroom mirror), I’ve decided that the saying about pulling faces is not an entirely silly one after all.

Get on a bus full of old people and you’ll understand what I mean. It’s easy to pick the woman who’s spent her life indulging herself in moral indignation, tightening her lips against mothers who are too young, mothers who are too old, young men with dangerous-looking haircuts, and Winifred Martin going off with May Charleston’s husband, and at their age, honestly. Yes, you’ll be able to pick her in a trice, since she’ll be the one with the cat’s arse where her mouth ought to be.

I once met a monk called Father Basil and I can attest to the fact that a life of contemplation does magnificent things for your skin in old age. Sit around all day with a beatific smile on your face, pondering the beauty of nature and the essential goodness of humanity, and you really will end up with your face permanently set in an expression of deep serenity. It’s too late for me, of course, to achieve such a thing. At just past thirty, I’ve already laid the groundwork for my old woman’s face, and what with all the bemused and quizzical faces I’ve affected in my time, I’m bound to be a very puzzled-looking octogenarian. Oh, that wind is out there all right. It just takes a few years for it to change you.

4 paths to grandma’s house of 5 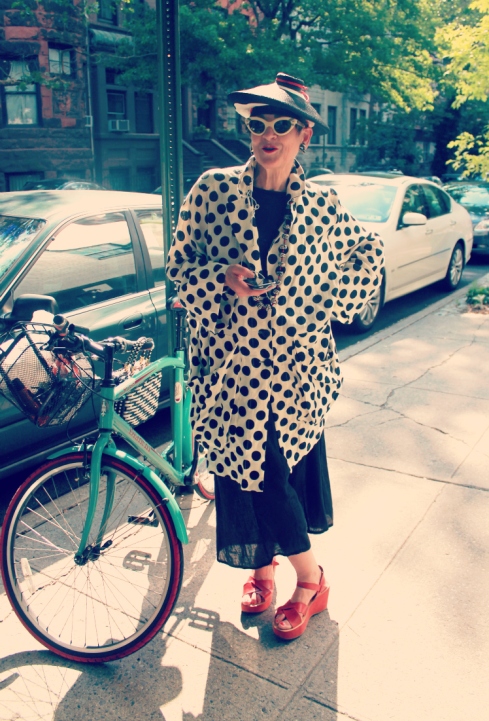 Ok, so I know that I’m gonna catch a lot of flack for this–but I’m nothing if not honest…. 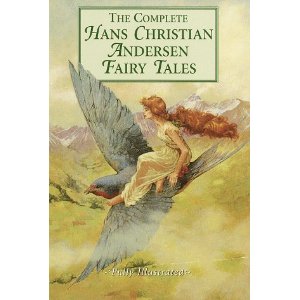 I seriously did not like the collection of HCA’s Fairy Tales.

Ok, we all know the classics. The Little Mermaid. The Steadfast Tin Soldier. The Nightingale  The Ugly Duckling. The Little Match Girl. I enjoyed those. For his time, HCA was totally groundbreaking. I mean, he and the Brothers Grimm kinda went back and forth ripping each other off a few times, but it is what it is. Never before had such fantastical tales been told! And I can appreciate that, I can, but from a modern viewpoint they are extremely dry.

Not to mention, really weird…

HCA had a tendency to forget facts he had already included and then change information later on down the road. And it seemed like if he wasn’t sure how to close a story or get rid of a character–BOOM YOU ARE DEAD, SIR! But not even in a way that really made sense. He just kinda trailed off with a lame, “And then he died…” or something like that.

He seemed to have some pretty extreme Christian leanings too, and a horribly misogynistic point of view. If you were a little girl and you did one bad thing–BOOM WE ARE CUTTING OFF YOUR FEET AND SENDING YOU TO HELL. Woah… If I had body parts amputated every time I misbehaved…let’s just say I’d be a pile of hair in the corner by now. At one point a little girl who did the unthinkable–stepped on a piece of bread in order to spare her new shoes–sunk down through the ground to Hell, where she was frozen like stone, covered in snakes and toads, and every time her mother cried for her the tears dripped down on her head and burned like acid.

So, don’t get me wrong–I totally understand that he was one of the forefathers of modern literature/fantasy. But his stories could be vastly improved on and (don’t hate me) I enjoyed some of Disney’s retellings better.

Let’s just say there is a reason why you’ve never heard of The Jewish Maid, Little Claus and Big Claus, or The Darning Needle.

It’s because they sucked. 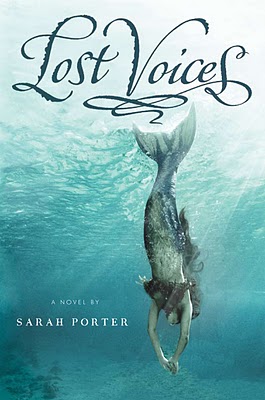 There’s something very seductive about being a mermaid. Unearthly beauty, half-human, half… other. The power to lure ships (and men) to their doom simply by singing to them. Not to mention, not having work, school, bills, or any of the other responsibilities that tend to make being a human so boring.  While Lost Voices by Sarah Porter was already on my reading list, my friend Kathryn and her blog Love Fearlessly inspired me to bump it up a few notches. Oh, and buy a mermaid tail. But, whatever! 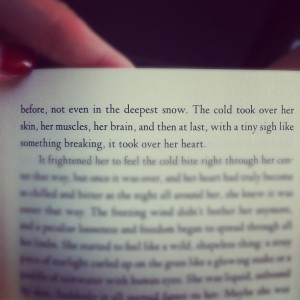 LV tells the story of Lucette, better known as “Luce.” She is an orphaned, abused girl that lives with her alcoholic uncle on a craggy island. After she finds a strange child’s corpse on the beach and her uncle goes too far one night, Luce falls off of a cliff–she thinks to her demise. Little does she know that abused, unwanted girls are often turned into mermaids who form barbaric tribes in the surrounding seas. When her transformation is complete and Luce realizes what she has become, she feels more at home with her fellow mermaids than she ever did on dry land. But will Luce ever be able to reconcile the fact that mermaids are murderers? That even she–who’s father’s boat mysteriously disappeared never to return–feels a fierce joy in her chest when she sings humans to their deaths? Not only does her astounding voice put her at odds with the tribe’s queen Catarina, the arrival of a new (very materialistic) mermaid changes the sense of peace she once felt with her new found friends.

Lost Voices was great.  Porter did an excellent job of describing underwater life and providing the reader with great visual details. You can almost smell the salt air and taste the slippery oysters on your tongue. (Ew…) I also loved that the whole mermaid experience was completely re-imagined, the same favor Maggie Stiefvater did for werewolves in her Wolves of Mercy Falls Trilogy. It’s always impressive when new authors can breathe life into old legends, and I give Porter mad props–especially since this was her first book. I liked that she had baby mermaids (called larvae) around the tribes, and made them into such heartbreaking, endearing characters since the other mermaids would never help or take care of them. 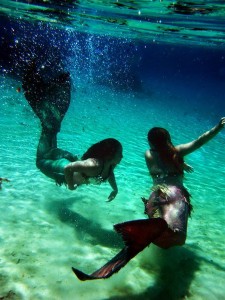 I did have trouble relating to how painfully shy and introverted Luce’s personality was. Half of her responses to negative stimuli made me freak out because I wanted her to fight. I’d like to think I would fight if I were in her… fins… I also did NOT like Catarina at all and rather than having sympathy for her mental breakdown I just found myself annoyed. I thought both her and Anais were both crazy bitches. But that was the point, I guess. Ugh. Anais… Just ugh.

All in all LV was a wonderful book and I look forward to reading more of Porter’s lyricism and prose. Mad props, girl, mad props. A new favorite has been born.

I think we all remember watching the Little Mermaid as a kid. I do. Heck, I had Little Mermaid underwear! It seems as though even after all these years our obsession with mermaids and the aquatic life hasn’t died down much. Living in Florida makes it a little easier to believe in these types of fairy tales. Surrounded by water on three sides, with beautiful beaches stretching for miles–it makes you wonder if the light you saw glinting off the waves wasn’t really glancing off of silver scales. Myself? I never understood Ariel. You want to be part of our world?? Please girl, come sit at my desk while I take your place in the surf. I don’t care much for seafood, but I’m flexible! 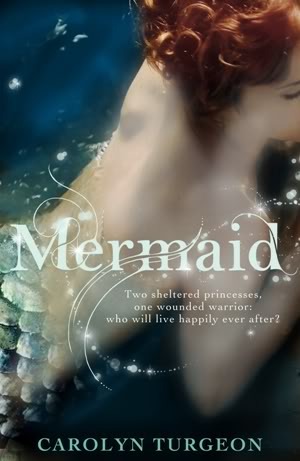 Mermaid by Carolyn Turgeon is a retelling of Hans Christian Anderson’s classic. It chronicles the lives of Princess Margrethe–stuck in hiding during war-time posing as a nun–and Lenia, the Sea King’s youngest daughter. On her 18th birthday Lenia gets to visit the surface of the ocean for the first and last time (as is traditional for mermaids on their 18th year). She happens upon a terrible ship wreck and saves one handsome (of course) man from drowning. As she tows him miles to shore, she falls madly in love with him–warm skin, thumping heart, along with the idea of his soul (which mermaids do not possess). Margrethe happens to be standing on the beach at the very moment that the strange man is dragged to shore and she witnesses a tender kiss between the two. When he wakes up, he believes the young “nun” has saved him. Too bad he turns out the be the bad boy prince from the rebel Southern Kingdom. Imagine that. Soon after, Lenia visits Sybil the sea-witch to strike a bargain.

“Souls were webs of light that contained the essence of a human’s life. Memories and loves, children and families. Every moment of a life, pressing in.”

I really appreciated this book. Retellings can be awesome or awful. This one was awesome. Turgeon’s style of writing is very lyrical and poetic and she has a great eye for details. I like how whenever a mermaid would touch a human’s skin, a shimmery trail would be left behind… forever. Is that cool, or what? The way that the two princesses became rivals was set up really well too. Both had so much at stake that I couldn’t help but change who I was rooting for after each new chapter. It was nice to see two beautiful women having respect for each other for once rather than being catty and evil. I liked how Turgeon added a little bit of sex appeal and raciness to the story–definitely not your Disney version here.

The only real complaint that I had about Mermaid was that the whole “love at first sight, marry me now” thing is so far-fetched that it just makes me roll my eyes. I get that extreme romance and true love theme is being imparted…but it’s a little tired if you ask me. But, I suppose that’s also how things worked back in the Medieval Times. You’re hot, I wanna bone you, let’s get married and make it legit. I get it.

Other than VEHEMENTLY disagreeing with Lenia’s choice to give up the sea for the human world, this was a great story. Definitely worth the read. 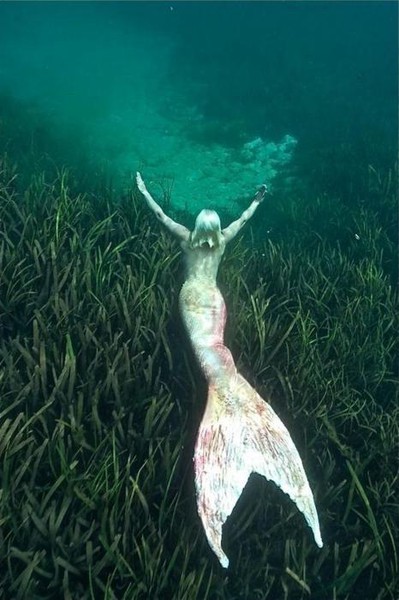