What can I say? I LOVED Tender Morsels. The name and the cover really caught my eye and happily, the story inside lived up to my expectations. Set in the late middle ages (by my closest approximation) TM follows several very different characters. 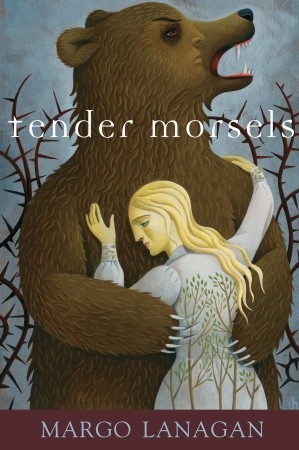 The first quarter of the book talked about Liga–a fifteen year old girl being sexually abused by her father. Several children are conceived during this terrible abuse, but her father visits the local mud witch–Muddy Annie–for “remedies.” Except Liga–after drinking his disgusting “tea” a few times and suffering miscarriages–finally catches on. When she falls pregnant again, she decides to keep the baby. No matter what.

She hides her pregnancy for six months, and by the time he finds out it’s too late.

Luckily for Liga, fate intervenes and he is killed in an accident shortly thereafter. Life is looking up.

Except, in those times there was no way for a single girl to explain a baby. And there is no one left to protect her. After giving birth to her daughter Branza, Liga suffers a incident that makes what her father did to her pale in comparison. So she decides to kill herself and her baby to escape her terrible world.

But their world is not everything it seems, and there is magic afoot. We’re talking bears who are really men, dwarfs, inter-dimensional travel, natural magic, and witchcraft. The point of view jumps from character to character, and illustrates how Liga’s decision ripples outward to those she loves the most.

I could totally give away this whole book, but I won’t because I want you to read it. TM had a tendency to drag a little towards the middle, but it was never boring. Even the “boring” parts were interesting. I really liked all the characters and how they fit together. Lanagan really handled some touchy subjects very delicately, and in a way that shouldn’t be offensive to anyone.

I was a little confused by “Bear Day” and why the magic in the world seemed to jump around in spurts. I wish Lanagan had provided a little more backstory on that. The ending made me yell WHAT?? because it caught me so off guard and was not your typical fairy tale ending. But all in all, amazing prose.

It’s a book for all of us who’ve ever wanted to run away.