Doing It by Melvin Burgess

I started Doing It the other day, right after I’d snuck into another apartment complex’s pool. As it turns out, that little bit of harmless mischief fit very well alongside the plot line.

Doing It details the sex lives, the would-be sex lives, and the confusion that goes along with being a hormone-riddled British adolescent. It follows Dino, who is desperately trying to lose his virginity to the girl of his dreams, Ben, who is having a kinky (but somewhat reluctant) affair with his teacher, and Jonathan, who realllly “fancies” his chubby BFF but is too ashamed to properly act on his feelings. 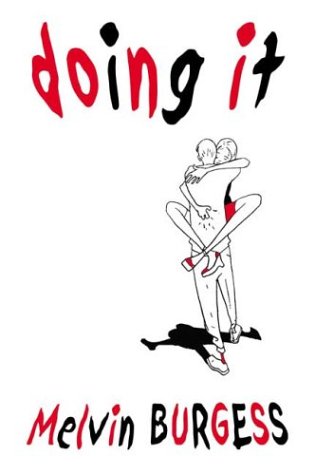 I really enjoy Burgess’ voice, and it was only after I’d finished this book that I realized I’d read another by him called Lady: My Life as a Bitch years earlier and loved it. Something about the plaintive sexuality and frustration contained within his writings is just totally page-turning. Plus, British lingo is really cute.

The characters did all take their turns pissing me off though. Dino was dumb because of what he did to his girlfriend Jackie, and Jackie was dumb because even though she’d had sex a million times before with her previous boyfriend she wouldn’t have sex with Dino. I don’t get it. Ben was dumb for letting himself be carried along in something he didn’t want to do and Jonathan was dumb for letting others’ opinions get in the way of getting the girl and for not just manning-up and going to the doctor, for chrissakes!

So basically, it’s an accurate portrayal of what it’s like to be a teenager.

4 make out sessions of 5

As an avid reader since I was big enough to hold a book, I continue to enjoy losing myself in the thrall of a good story on a daily basis. Since many of my cohorts do not share the same passion, Cracking Spines will be the perfect outlet to express my adulation or frustration concerning the books that cross my path. In this way, my loyal followers will be able to enjoy the stories that are worthwhile and avoid the duds altogether. I also have a Shelfari account at http://www.shelfari.com/chelseamcdonald15 END_OF_DOCUMENT_TOKEN_TO_BE_REPLACED
This entry was posted on Friday, October 25th, 2013 at 7:02 pm and tagged with book review, british humor, coming of age story, doing it, melvin burgess, sexuality, snogging and posted in YA Fiction. You can follow any responses to this entry through the RSS 2.0 feed.
« Good Omens by Neil Gaiman & Terry Prachett
This is All: The Pillow Book of Cordelia Kenn by Aiden Chambers »