The Emperor of All Maladies by Siddahartha Mukherjee 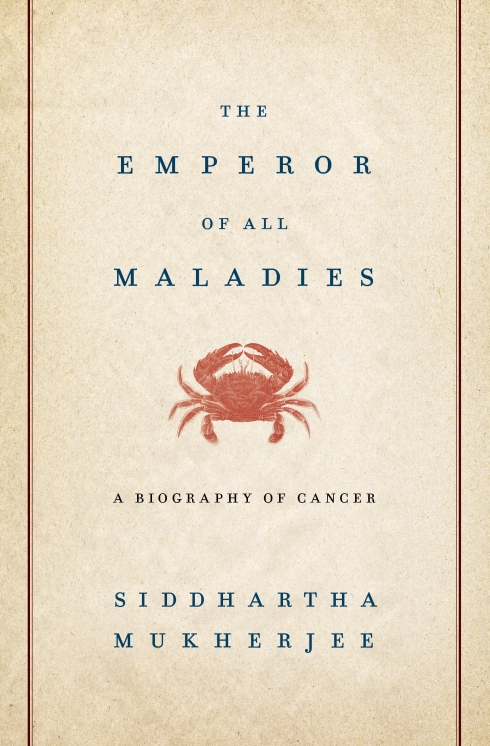 Unfortunately many of us have been touched by cancer, directly or indirectly. A couple months ago we got the news that my boyfriend’s mother may have a pretty serious form of immune/bone marrow cancer called multiple myeloma. *Cue frantic research*

The Emperor of All Maladies is described by Mukherjee as a “biography” of cancer. He treats the insidious disease almost as if it’s a sentient and prolific monster. The expansive novel takes us back several thousand years and wipes away the notion that cancer is a modern affliction. Mummies have been found with painful lumps in their shriveled arms. Ancient skeletons were exhumed and discovered to be riddled with tiny holes–caused by a skin cancer taking root.

By no means is it caused solely by our new lifestyle (although I’m sure fast food, cigarettes, and tanning beds aren’t helping…) Mukherjee explains that many of the diseases that would’ve once killed us a few hundred years ago have been wiped out–thus opening the doors for cells to mutate with advanced age and cancer to form.

“Cancer is built into our genomes: the genes that unmoor normal cell division are not foreign to our bodies, but rather mutated, distorted versions of the very genes that perform vital cellular functions. And cancer is imprinted in our society: as we extend our life span as a species, we inevitably unleash malignant growth (mutations in cancer genes accumulate with aging; cancer is thus intrinsically related to age). If we seek immortality, then so, too, in a rather perverse sense, does the cancer cell.”

This is a very interesting and informative read. It can get a little scientifically dense at times, but as someone with very little previous knowledge on the subject, I found it fairly easy to follow. Mukherjee incorporates personal experiences as an oncology doctor, early experiments, the history of many surgical procedures, and the evolution of chemotherapy. It’s kind of daunting to realize that in the 1940’s doctors were charging at the front line of cancer medicine–sure it would be obliterated at any moment–only to remember now it’s 70 years later and there is still no universal cure to be found.

But that’s not to say there haven’t been any major advancements. In the 1950’s, while doctors puffed on cigarettes during lung cancer operations, they were learning that their own smelly habit was causing the black tributaries of tar and malignant cells. Too bad the knowledge hasn’t stopped everyone nowadays…

I highly recommend this book, to anyone more interested in learning about the disease. It was at once terrifying and enlightening. Don’t expect to find a cure in it’s pages, but you will find hope.

As an avid reader since I was big enough to hold a book, I continue to enjoy losing myself in the thrall of a good story on a daily basis. Since many of my cohorts do not share the same passion, Cracking Spines will be the perfect outlet to express my adulation or frustration concerning the books that cross my path. In this way, my loyal followers will be able to enjoy the stories that are worthwhile and avoid the duds altogether. I also have a Shelfari account at http://www.shelfari.com/chelseamcdonald15 END_OF_DOCUMENT_TOKEN_TO_BE_REPLACED
This entry was posted on Sunday, May 5th, 2013 at 5:34 pm and tagged with biography of cancer, cancer, cancer research, cause of cancer, cure, data, evolution of cancer, hope, malignant cells, science, siddahartha mukerjee, the emperor of all maladies and posted in Biography, Nonfiction. You can follow any responses to this entry through the RSS 2.0 feed.
« Quote of the Day: Roald Dahl
Dreamhunter and Dreamquake by Elizabeth Knox »

2 responses to “The Emperor of All Maladies by Siddahartha Mukherjee”