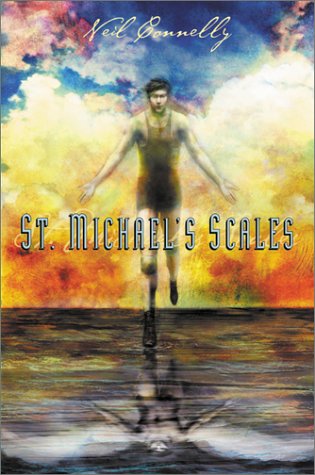 St. Michael’s Scales was a very strange piece of fiction.

The protagonist Keegan Flannery was born one-half of a set of twins. The other–his brother–Michael, died at birth. After his mother is committed to a mental hospital and his older brother runs away from home, Keegan is left with two brothers who ignore him and a father who doesn’t remember he exists. The only attention he gets at school is negative because of his extremely small stature. When he realizes that his father has been telling people his mother is dead rather than face the embarrassment of owning up to the facts–Keegan begins having dreams of his dead twin. All at once, he knows how to right the wrong done to his family.

He must kill himself before his 16th birthday.

But when a fluke absence allows him a spot as a featherweight on his high school’s wrestling team, things begin to change. Not only is he dreaming of his brother Michael, now he is beginning to hallucinate fighting with him. He knows that Michael was the brother that should have lived, and the thought haunts him every day.

Being raised Catholic, knowing that suicide is a mortal sin…will Keegan go through with his plan to kill himself, or has wrestling given him something to live for?

SMS was a very weird novel. It reminded me of A Prayer for Owen Meany, not only because of the religious aspects but also because Keegan and Owen both fit the same physical description. They also both had a mission they were planning on carrying out, and both knew that it would lead to their untimely demise.

I never truly felt attached to Keegan, and while I felt sympathy for his family situation, I didn’t understand why or how he thought his suicide would rectify the tribulations his family had gone through. Also, with a history of mental illness in his family, he should’ve begun to realize that he wasn’t in his right mind when he began to see visions of his brother. Rather than him viewing his dead twin as some sort of spiritual guardian, he viewed him as a malevolent force to be reckoned with.

All the blame for those feelings should be placed solely on his parents shoulders, especially his father’s for ignoring him.  AND not only did his mother always get a dually-named cake–she also would force Keegan to pick out one of his presents and bring in to the cemetery each year on his birthday. It’s understandable to want to remember a dead child and keep him a part of the family, but not to the detriment of the living children. No wonder Keegan felt he played second fiddle.

I wasn’t a fan of this book, and I would not recommend it.

As an avid reader since I was big enough to hold a book, I continue to enjoy losing myself in the thrall of a good story on a daily basis. Since many of my cohorts do not share the same passion, Cracking Spines will be the perfect outlet to express my adulation or frustration concerning the books that cross my path. In this way, my loyal followers will be able to enjoy the stories that are worthwhile and avoid the duds altogether. I also have a Shelfari account at http://www.shelfari.com/chelseamcdonald15 END_OF_DOCUMENT_TOKEN_TO_BE_REPLACED
This entry was posted on Wednesday, July 25th, 2012 at 12:03 pm and tagged with catholic school, mental illness, neil o connelly, religion, st michael's scales, suicide, teen suicide, wrestling and posted in YA Fiction. You can follow any responses to this entry through the RSS 2.0 feed.
« Snapshots from Mildenhall 7-23-12
The Greatest Speech Ever Made… Ironically, by silent film star Charlie Chaplin »